Posted on October 4, 2011 by elainegallant

It was an informative discussion of Steve Martin’s “An Object of Beauty” at the Lahaina Galleries on Front Street in Lahainatown after Kim vonTempsky and Jim Killett shared some objects of beauty they had on display by sculptor Frederick Hart. 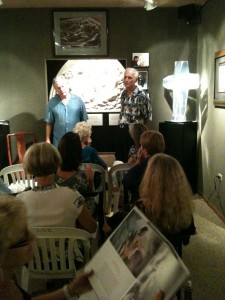 VonTempsky (left, Killett right) focused on the Washington National Cathedral and in particular Hart’s contribution to its west facade, a sculpture titled “Ex Nihilo” that is part of a tympana to include “Creation of Day” and “Creation of Night”. There are also the trumeau figures of Saint Peter, Saint Paul and Adam. 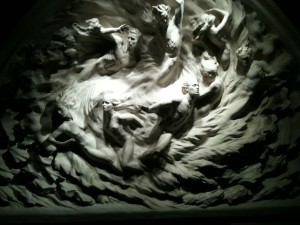 Meanwhile, Killett shared the story of Hart’s life (1943-1999) and how he was expelled from various schools starting with the 9th grade, trotted around Washington working construction in order to meet all the carpenters, sculptures and such, until he entered the international sculpture competition and won the prestigious Washington National Cathedral commission.

This entry was posted in WMBC Web Vine. Bookmark the permalink.